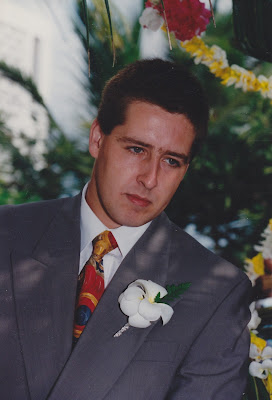 After yesterday, it is only fair that hubby takes part in the festival.

It was just after 4pm as I few a minutes late, as is the bride's prerogative! In this photo he is listening to the registrar who is giving the reading as he carries out the ceremony. I wonder what he was thinking. Possibly that it was too late to run!

The choir remained for the ceremony and they wore typical African vibrant colours. You can just see the flowers above hubby's head. His corsage is made of Frangipani's. The same flower appears, amongst others in my bouquet.

After the ceremony we were taken into the gardens for the official photographs. I recall we paid the photograph extra to have the negatives of the photos, money well spent given the distance we were from the photographer.

I am not alone in having to make the downsize decision as I notice that hubby still has the suit in the wardrobe and the tie which he still wears every now and again, and has the affection name of the "Kenyan tie"
Posted by Julie Goucher at 11:30 am