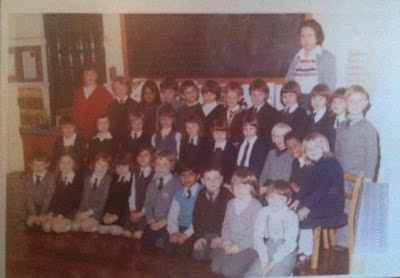 This is the year after the photograph taken yesterday, which makes this Spring 1976 or so.

The teacher was called Mrs Cressfield and boy could she be fierce.

Her speciality was maths and she would become so angry she would go red enough to burst. To a 6 year old that is terrifying and it undoubtedly put me off maths, despite the fact that to go into pharmacy I needed a good understanding of maths!

Despite having a bit of a rage, she was a very nice lady and like Miss Jerome, remembered her students long after they had moved on. The last time I was in Guildford I saw her in town, the first time since the early 1990s and she still remembered my name.

Again, see if you can spot me.
Posted by Julie Goucher at 9:30 am