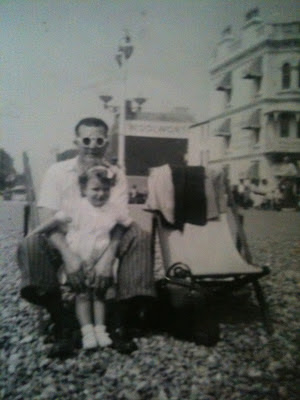 We know from other photographs that this was taken at Brighton on the English South coast. In this picture is my Grandfather George Butcher and my Mum who was about 7 in this photo. My Grandmother was taking the photograph. I recognise the black bag from other photos.

If you look closely at my Mum's left leg you will see that it is noticeably thinner than the one of the right, a legacy of her contracting Polio in 1952.

Mum tells me that she remembers being unwell and the doctor paying a house call. He did not know what the problem was and suggested that my Grandparents continue with their holiday plans, a pre-arranged visit to Southend to stay with my Grandfather's sister and brother in law who appeared on day 18.

The day she went to get out of bed and collapsed. My Grandparents called for an ambulance and Mum was admitted to hospital, initially to The Royal Surrey Hospital in Farnham Road Guildford before being transferred to the Isolation hospital at Pyrford. Mum remained at Pyrford for around 8 months, during that time she could only see her parents through the glass. Stories, cuddles and hugs were not possible. Eventually the diagnosis of Polio was given and from the age of 5 until Mum was 17 she visited the hospital and had regular check ups.

She and the medics had no idea that in around 40 years, she and a whole generation of Polio survivors would be diagnosed with Post Polio Syndrome and subsequently have another battle to fight. Mum was a lucky one. She remained free from callipers, sticks and wheelchairs all her life and only in the last 2 years has finally given into needing a stick and very strong pain killers. You can read other posts I have written about Polio HERE

I love the friendly, fun and family feel of this photo. My Grandfather wearing her sunglasses and clearly happy to have his little girl back!
Posted by Julie Goucher at 8:22 am