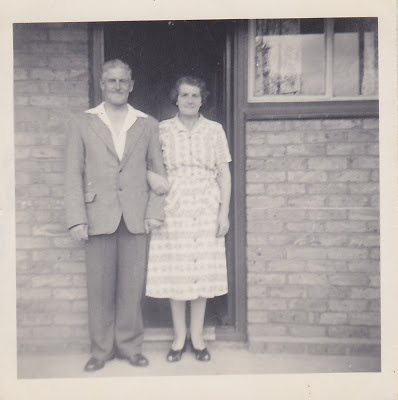 Today's photograph is of my Great Aunt Glad, my Grandfather's sister and sister to Rose who appeared here yesterday and her husband my Uncle Frank.

This photograph was taken around 1960. Aunt was born in 1901 and Frank in 1899. He had been born in Dodford Northamptonshire and some point moved to Surrey/Hampshire.

Uncle was in the Army so I suspect he was either posted to Aldershot which was just over the border into Hampshire from Wanborough or stationed at Guildford when there were army barracks there.

My Cousin has the military papers of his father and shared them with me.

When Frank enlisted in 1922, he was no stranger to the army, as he had served in the British Army during the First World War, enlisting in 1916 and was discharged in October 1922. He married my Aunt in June 1924 at Guildford, although without the permission of his commanding officer and they had to repeat the ceremony at the registry office. I am guessing that my Aunt went with Frank to Germany, as she certainly went to Singapore with him during the 1930s.

Frank and Gladys raised 3 children. The eldest recalled spending time in Singapore and also spending time with his Grandmother in Surrey, whilst his parents were overseas.

However, his military connection did not end at discharge. During the Second World War he remained living in his military home and worked from what I can establish from the limited knowledge in the military barracks in a defence position.

Posted by Julie Goucher at 7:00 am