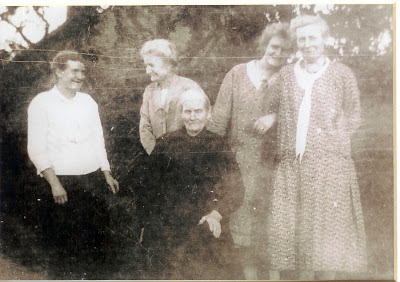 This photograph was presented to me quite a few years ago by my Grandfather's first Cousin, Ivy.

My Great Grandmother (Annie Prudence) who appeared on day 6 is on the left, followed by 3 of her sisters Mabel Sheffield, nee Harris, who was Ivy's Mum, Kate Cox nee Harris and Rose Cresswell nee Harris.

The lady sitting in front of them is their mother, my Great Great Grandmother, Caroline Harris nee Ellis (1844 - 1935).

Caroline was a formidable lady. A true Victorian stickler and thought nothing of telling her grandchildren off with a very hard smack! All my Great Aunts and Ivy stated to me that she had a really fierce wack for someone who was fairly petite.

I wonder whether my Great Grandmother, who we all called Granny was ticked off by her mother as she is clearly laughing with Mabel.

Caroline was born in Puttenham and was the daughter of George Ellis and Prudence Budd. The Ellis family were fairly complicated. George the son of a military man and from Guildford, although there were Ellis families that were related in nearby Godalming and Elstead. She married Henry Harris from Headley Hampshire, which is just over the border from Puttenham, and further research shows that his family would have known my Grandmother's Elstone and Denyer families.

Caroline lived with Annie and her husband Charles Butcher in Wanborough, where the family farmed at Manor Farm. When the family moved to Onslow Village in 1930 she went with them. This photo dates from 1930.