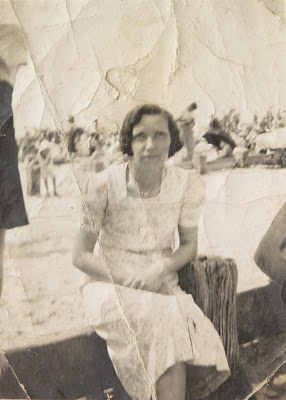 This photograph is of my Grandmother and came to me after she had passed away. It was one of three photos that  was posted to me from my Cousin who thought I might like them. She was quite right!

I can not exactly date this photo. I have a feeling that it was taken before my Grandmother was married. I can not see her fingers, because of how she was sitting with is a shame.

I notice that she is wearing a necklace. Something, that I never saw her do. The only jewellery she wore was her wedding ring. Her Eternity and Engagement rings were always in her jewellery box and are now in mine! I wore my Grandmother's wedding ring as my something old on the day I got married. Which was, very special. More about that on day 14 of the festival!

I think that is taken when she is in her mid 20's, so around 1937 which would fit with the general scene of pre Second World War. As to the location, seaside favourites were varied. As a child we would go to Bognor, Portsmouth or Brighton on the South Coast. Brighton is known for its very pebbly beach. It looks like sand behind, so that rules out Brighton. My Grandmother's sister, Elsie and her family routinely went to Hastings, so perhaps she went with them. My Grandfather's sister, Gladys and her family lived in Southend Essex and we have lots of photos of them there.
Posted by Julie Goucher at 9:30 am