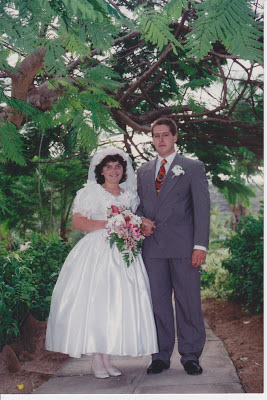 After the ceremony we were taken into the formal grounds of the wedding venue for the official photographs. It does not look particularly sunny, but it was and it was around 5pm by now.

I had a lovely bouquet made of tradition flowers which were kept in our room until they had seen better days. Whilst we were at the ceremony, the staff had been busy and had decorated our bed with petals that spelt out "Happy Honeymoon", sadly we only just realised what it said as hubby hit the air conditioning unit and the central fan sent the petals everywhere!

We were at Turtle Bay, which is one of three bays at Watamu on the Indian Ocean coast of Kenya within the confines of the Watamu Marine National Park

From looking at the webpage of Turtle Bay it has matured. The rooms look just as I remember them and I think that weddings there are more popular that they were in the early 1990s. I had planned to go back to celebrate our 20th Wedding Anniversary, but think we have a visit on the cards to Australia!
Posted by Julie Goucher at 6:00 am