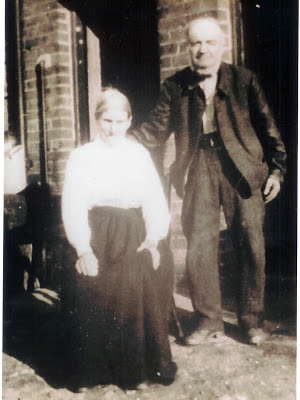 This is a photograph of my Great Great Grandparents, Henry and Caroline Harris nee Ellis. Taken on the occassion of their 60th Wedding Anniversary. Like the photograph from yesterday this was given to me by my Grandfather's first Cousin Ivy.

Quite a few years ago Ivy accompanied me to see my Great Aunt Rose, the oldest of my Grandfather's sisters. We were also joined us was his youngest sister, Doll.

Whilst I was in the kitchen getting the tea done as instructed, I could hear the three of them chatting away. It was truly wonderful and if I could turn back the clock and relive a moment this would be that moment.

We had the tea and cake and I had been making notes furiously. The chatter was free flowing and not in a very logical order. To give my arm a rest I pulled out this photo, which I knew would get them chatting again.

I asked, that I wondered who took the photo. I was not really expecting an answer, until my Great Aunt Rose said that she had and named the occasion, their 60th Wedding Anniversary in December 1924 at the family home at Manor Farm Wanborough.

The talk that day steered round to Caroline and her fierceness and Henry being a really gentle Grandpa. They spoke of Caroline giving the boys, my Aunt's brothers a smack for taking apples of the trees and as I watched my Aunts and their cousin I could see that they had all cast their minds back to a previous, more carefree time.

It was a truly special day.

Posted by Julie Goucher at 6:00 am