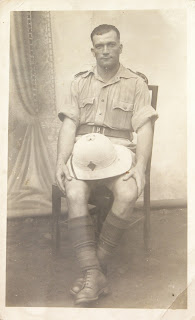 This has to be one of my very favourite photographs. It is a photograph of  my Grandfather, George Butcher.

This was taken around 1940, so he was aged 32. He had only married the previous November. At the outbreak of the Second World War he lived in Guildford and was working for Unigate Dairies. His 3 brothers were working at the farm that his family had been at since 1930.

For whatever reason, he decided to join up and was posted initially to Africa where he spent over 2 years. He then returned to England for a short time before being posted to France, Belgium and The Netherlands.

I called for his service papers about 5 years ago and it is one of the things that I really must do, to breakdown the fine details of his war experiences.

The reverse of this photo simply reads "Your loved one George X" and I am guessing that this was done and then given to his family members. This copy was my Grandmothers.

There is something very special about this photo, maybe the simplicity of it, but my Grandmother always kept it and now it has passed to me. I have had it copied and enlarged and it now sits in a frame in my living room.
Posted by Julie Goucher at 9:30 am